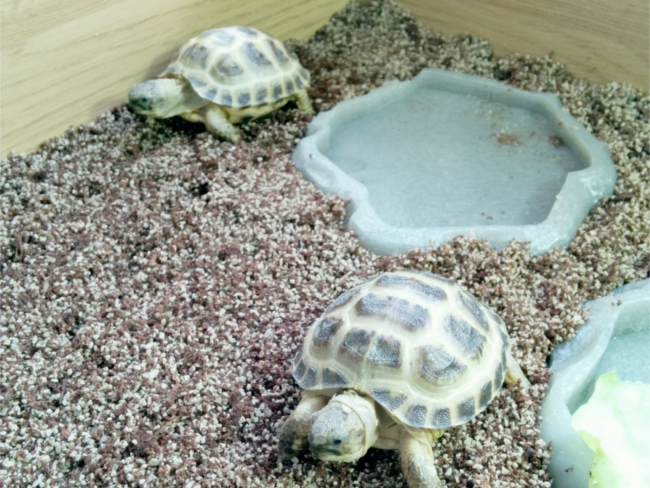 Meet the newest members of the Chai family: Bertle and Eric! I’m a tortoise Mama!

Two weekends ago, I picked up two 4 month old Horsfield tortoises to join our clan. If you follow me on my other social media, you’ll probably have seen a few snaps and updates on them already. After a flurry of Tweets and Instagram comments, I thought I’d write a brief intro to my new little ones, especially as I found it pretty daunting to sift through any sort of info on getting tortoises for the first time.

Bertle and Eric are now just over 4 months old… with a life expectancy of 60+ years. I’m not gonna lie, I constantly feel freaked out at the thought of them outliving me! They’re both very lively throughout the day and tend to calm down in the late afternoons for a nap (just like me!) before having a little munch and burrowing session in the evenings. Something that my photos can’t portray is their teeny tiny size! They fit in the palm of my hand (as in, sans fingers…) and are SO adorable.

Bertle is still the more adventurous albeit clumsy tortoise: she loves going through their tunnel over and over, scaling the top of it like a bridge, tentatively edging around their feeding dish and she also loves balancing on the slate pebbles that we popped in for sharpening and polishing their claws. Oh and she can eat whilst napping, FYI.

Eric on the other hand is a sly little one. He spends much of the day napping in three different corners of their hut or munching on Brussels sprouts. However he is also a speedy one if he decides to be, often scaling the glass panel and making some terrifying shadows! He’s relatively chilled and calm, preferring to burrow into the bedding and poke around, instead of anything ‘fun’!

Firstly, finding somewhere to buy tortoises was an utter nightmare. I Tweeted something and Lucy piped up that hers arrived through the letterbox! A quick search online led me to find a breeder around 20 miles away from me via Gumtree, so a few email exchanges and a short drive later, Louise and I carefully chose two little tortoises from a litter of six Horsfield Tortoises, also known as Russian Tortoises.

I chose a greedy little girl who was super active and busy manoeuvring around the other baby tortoises. Speedy, cheeky and adventurous, with a darker and more rounded shell, I named her Bertle. My sister chose a sleepy boy, with a penchant for burrowing and climbing on top of everyone else! Still a sleepy one who prefers to chill out in the hut, he’s named Eric-Maxmillian Chai.

My two tortoises live quite happily in a medium-sized indoor enclosure. As they’re super young, they’re not quite ready for an outdoors enclosure, although I’ve been taking them out in the sunlight to the garden where they can explore the grassy lawn, paved terrain and other surfaces and greenery. I’ll post an update once their outdoors enclosure is complete!

Bertle and Eric seem to be fairly settled in their table enclosure. There’s a glass panel, heated glass pad and their lap in the set-up, with large and medium feeding bowls. We also took some slate and rounded pebbles from the garden, disinfected them and adding them to a corner so they can keep their claws in shape. I’ve added a fun ‘To The Beach’ aquarium ornament and a little play stick bridge (can be shaped into a tunnel!) so they can explore heights.

If you’re considering getting tortoises, do keep in mind that they’ll need UVA heated lighting for about 8-9 hours a day!

Currently I’m feeding Bertle and Eric a mixture of cabbage, Brussels sprouts and herb vitamin pellets, along with wildflowers and weed leaves when I have the chance to pick them. They tend to avoid their water, so we plop them in their water bowl to encourage them to drink as well as bathe them, but they get most of their hydration from leaves anyway. Brussels sprouts are their favourite!

So there’s a brief introduction to my new tortoises. I’m honestly smitten with them and they’re such a fun pet to keep. They’re hardly conventional and you won’t be able to cuddle them (although they love being handled!) but they’re fun to watch and have plenty of character and personality. If you’re considering getting tortoises, feel free to email me and I’ll help with your questions!